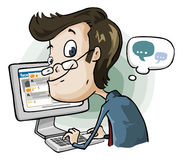 I used to have a Facebook account but soon realized how it was not solving any of my problems and was actually cluttering my life. In addition, I realized that I was not in control of the pictures and information that others were posting about me which their list of "friends" can see. In the context of Facebook, we have to be careful about how we use the term "friends" which is somewhat distorted in my opinion. Before social media, it took us years to build friendships and then a lot of effort to maintain the established relationship, but now, anyone could become anyone’s instant friend. In fact, our decision to befriend some of the other Facebook users by either accepting their friend request or inviting them to be our friends, is based on their profile pictures and other information which may be fake unless of course we know the person. The trust that people place in online "friends" whom they don’t even know is amazing. The same people who would not approach strangers in a coffee shop and parties because of shyness or ego, are eager to become friends with complete online strangers from behind a computer which is even more dangerous because when we meet a stranger in person, we at least know how they look like. Although they could still lie about their names and other information when we meet people in person, at least we can receive some real information like physical appearance and behavior. We don’t have as much luxury online to get accurate information about strangers quickly.

Before I explain how Facebook destroys relationships, I would like to credit the way Facebook helps people find lost friends across multiple continents. Again from personal experience, I have seen many of my own family members and friends find relatives and friends whom they lost contact with years ago in other parts of the world. Facebook’s ability to help people find other people they know is amazing but it’s often people’s lack of risk awareness which leads them to mismanage Facebook by posting so much personal information about themselves and others who have entrusted them with some private pictures and information.

I have many reasons to believe that Facebook destroys relationships but mainly I have sadly seen friends and relatives fight over pictures that were posted or things that were said about themselves and others. Sometimes being out of sight is being out of mind but other times it doesn’t matter and people will still publicly post stuff about you.

Some ways that you can reduce the Facebook exposure risk is not having a Facebook account at all, and being careful about pictures that you take with other people’s cameras, and sharing information with people who can potentially announce your information over the Facebook loudspeakers. On the other side of the coin, when you hear and see comments, pictures and even business reviews, you must really validate and examine the information to make sure it is accurate and applies to your situation. It’s very easy to open fake online accounts with fake names and profile pictures to make all kinds of accusations and announcements. Therefore, be careful about what you see and read before you react.

That being said, if you interact with people who use Fcaebook on steroid, it’s better to keep your Facebook account active on a very limited basis in order to monitor what they post about you so that you can take action by asking them to remove what they posted and potentially have a serious chat about what they should not post about you in the future. After you have a talk with your friends about what is acceptable to you when posting your information to Facebook, and realize that they are not honoring your reasonable request, then maybe it’s too risky to have a Facebook connection with that person, or allow the person to take picture of you with his camera, or share too much information with the person. Basically, you have to reassess what you share, to what extent, and with whom.

Upon my realization that Facebook destroys relationships and basically was not for me, I deactivated my account after just a few inactive months. Facebook did not allow me to delete the account at the time and only offered me the option to deactivate the account which means that whatever information I had in my account which was not much given my privacy awareness and information security experience, probably still remains in Facebook.

In summary, close friends whom you see often to exchange information and take pictures together are potentially more dangerous because they can post those private photos and information to their Facebook accounts. Some people post information about their friends without knowing that a high percentage of clients and employers research Facebook about job candidates or a business owner which can result in a denial of employment or business if they don’t like what they see on Facebook such as the person’s location where the photo was taken, state of being, or even dress they’re wearing. This is another way Facebook destroys relationships.

I don’t think that people are evil for the most part as it relates to social media postings but their lack of awareness about privacy risks and consequences of their public announcements about other persons can lead to unwanted situations such as destroyed relationships and lost friends.

Read a related article about how Facebook destroys relationships.