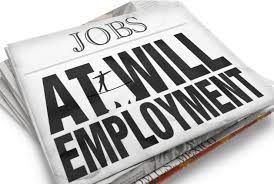 Many businesses not only adopt at will employment policies but they even pride themselves in being an at-will employer constantly reminding employees about how their employment can end without cause or notice while at the same time deplore when employees leave the company without notice and respect. The adoption of at-will employment has tremendous negative consequences for the business including lost employee loyalty, negative public image, or low employee morale and productivity.

What is At Will Employment

Let’s first discuss what at-will employment is and why regulators and companies even adopt such a brutal strategy which reduces the business ability to maintain a competitive edge in the global marketplace although it appears that the strategy is in their favor at first.

According to Wikipedia “at-will employment is a term used in U.S. labor law for contractual relationships in which an employee can be dismissed by an employer for any reason (that is, without having to establish "just cause" for termination), and without warning. When an employee is acknowledged as being hired "at will", courts deny the employee any claim for loss resulting from the dismissal. The rule is justified by its proponents on the basis that an employee may be similarly entitled to leave his or her job without reason or warning. In contrast, the practice is seen as unjust by those who view the employment relationship as characterized by inequality of bargaining power. “

The last sentence in the above paragraph is true in a sense that a company has advantage over an employee with the at will employment law while the company can throw money and other perks at key employees in order to assure them that they will never be the subject to any abrupt firing which is of course ludicrous and a very cheap management style. While companies are free to hire and fire employees at will without notice or justification with this legal carte blanche, companies can also resort to some sort of retaliation when employees abruptly leave without notice. That said, when companies adopt an at will employment policy, they should never ever state in their corporate values that employees are their greatest assets because such statement would be contradictory to their business practices and may be ridiculed.

Employee Protection Against At Will Employment

Under the public policy exception, an employer may not fire an employee if it would violate the public policy doctrine or a state or federal statute. In other words, employers can fire employees as they wish for as long as the Government is not impacted.

This includes retaliating against an employee for performing an action that complies with public policy (such as repeatedly warning that the employer is shipping defective airplane parts in violation of safety regulations promulgated pursuant to the Federal Aviation Act of 1958, as well as refusing to perform an action that would violate public policy.

Let's face it, at will employment labor law was created to give businesses the upper hand for eliminating employees quickly and without cause or retaliation. But, businesses don't have to bite it. In an era in which we witness great companies like Starbucks negotiate a tuition program with a university for their employees and then pay the tuition for them, it seems to me that these companies have figured out that educated and pampered employees benefit their companies even if employees choose to leave their companies to go work for someone else which is less likely.

Consequences of At Will Employment & Solution

Although the at will law was created to solve a business problem, just like drugs, it may solve one problem but introduces many interrelated or independent side affects. For example, an employee can maintain his or her productivity  out of fear of being eliminated yet be disloyal and unsocial at workplace which can increase the risk of security incidents endangering others and business assets. Or, an employee can remain social but be disgruntled and less productive.

The employee lack of loyalty or respect toward the company has tremendous consequences when it comes to theft and damage of business assets. Although employees who are terminated on the spot are escorted out immediately by security conscious companies, let’s not underestimate the risk of disloyal employees who are retained or encouraged to stay with perks and money. Although they may be happy on the outside, they probably have less respect for the company they work for and the only thing keeping them at the company is financial reward and not the belief  in company products or services.  The moment there is an opportunity for greater financial reward while placing their companies at risk, these retained employees have enough justification or incentive to make the move.

It is obvious that such laws are created for the benefit and protection of the business. But ultimately employees and customers determine the fate of a business. With that in mind, let’s remember that the execution of an employment at-will strategy also results in negative chatter with insiders as well as outsiders. This ultimately reduces the positive image of a company which is even more damaging if a company relies on its brand equity to attract and retain customers.

Keeping fearful employees while companies eliminate some they dislike or to cut cots in the most brutal way is not a wise long term strategy for business growth and survival. Making the wrong  hiring decisions and cost cutting are just part of  any business but a little thoughtful analysis and investment upfront will help companies reduce the risk of hiring the wrong employees or the urge or necessity to eliminate employees quickly without notice or without a training program to give them a chance for success. For example, companies can decide if an open position is for a short or long term need and consider hiring a contractor instead of hiring full time employees and firing them 6 months later. Companies can also institute various training and redeployment programs to improve the skills of those who need help to excel in their current position or transfer them to another area of the business where the use of their talents can be maximized.