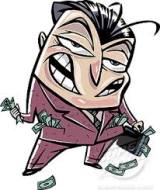 In order to effectively deal with conman scams, we need to recognize the scams first. There was a TV program called "to catch a con man" which tracked down con artists and their scams. I don’t know if you ever watched this program but I’m really shocked to see how many people are victimized by these scams. Some not only give away their life savings but also even risk losing their identities and jobs by emptying their employer’s accounts to please the scammers and their own greed. It almost sounds like gambling when losers continue to chase their losses risking even more.

Most conman scams include sending unsolicited e-mails or spam e-mails to potential victims to be. The potential victims are not discriminated at all and could be well educated with high positions within the society. Such scams are also called the “Nigerian Fraud” among others things. But, these conman scams can be originated from any country and committed by any person. To me, a scam is a scam; it may come disguised in an-e-mail, a phone call or in person. It just happens that the majority of these conman scams were originated in the form of an e-mail. I say originally because these scams are initiated by an e-mail and once contact is established and trust is gained when the "victim to be" bites the bait, the scam expands into official looking letters and documents and even face to face meetings to reach the goal which in most cases includes huge financial gains. Now, to catch a conman and his or her fraudulent acts, we need to detect them no matter in what form or shape they approach us. To further illustrate how this type of crime functions and learn how to detect them, let’s break it down into distinct separate sections.

In conman scams, you get an e-mail from someone you don’t know. The e-mail asks for your help and promises to compensate for your help in cash. It may even offer cash in your country’s currency to make it appealing to you. For example, the scam e-mail offers dollars for a victim living in the Unites States or Euros for those living in Europe as a selling point to avoid currency fluctuation or exchange costs. The e-mail further describes the situation and offers millions in exchange for just a few hundred or thousand. Your money in general is needed to unleash the millions so if you want the millions, you have to come up with a down payment first. The scenarios in which millions are trapped or to be explored vary by the size of your imagination but they could include a dead and rich husband’s account or will, oil fields to be explored in Nigeria, start of a new company, or a rich woman waiting to share her life with you. You get the idea. The professional scammers are usually very patient and their initial goal is to gain your trust so they don’t initially push you too hard until they have gained your trust, know your personality and how desperate or interested you are. Any show of weakness and hesitation on your part will make them work even harder and upon a positive sign on your part to go ahead with the plan, scammers will move to the next steps which may include a phone call, request for a small transfer, or provide you with official government documents. The goal is to gain your maximum trust and control over any or all money in your possession. Remember, scammers may make you even steal others’ money for them so they’re not just limited to how much money you personally have but also how much you can get from your relatives, friends and employer.

Nature of the conman scams

I’m not sure if you’ve ever dealt with conman scams especially those that arrive via e-mails, but they are usually very poorly written and don’t seem to be part of a professional or organized crime groups. It gets even worse when the scammer claims to be a banker or oil investor and is asking for a few dollars to get the plan into action. To detect conman scams, look for substance in the e-mail, ask questions like does this story make sense, question the e-mail address, how is the e-mail written and organized, who is the writer and how can you verify his or her identity, is the writing consistent with the scammer’s identity. For example, if they claim to be bankers, they should at least be able to write well and maybe that’s why they claim to be from another country to justify their poor writing skills. Also, if the e-mail promises 2 million in exchange for just 2 hundred, it’s too good to be true and you should delete and move on. Actually, report the e-mail as a spam and move on.

As I mentioned, the immediate goal of the conman scams or initial contact with you is to get your attention. If you delete the e-mail without reading any part of it, the e-mail accomplishes nothing and you win. But since this is a spam e-mail in addition to being a scam e-mail, it is sent to millions of people with the hope that some people will read it and then a small portion of the readers will actually reply or respond as intended by the conman scams.

As you may have guessed, the scammer is not the scammer in all communications. However, the scammer is the scammer when you meet with him or her face to face, at least in physical appearance. In some cases, they may send their agents to the meetings, although, face-to-face contacts are not necessary to accomplish the goals of conman scams. The various government agencies fighting this type of crime, must establish physical contact to catch a conman. The originating e-mails and phone numbers are most likely publicly shared and/or created based on false or stolen identities. However, their communication line can be traced back to arrest them while they’re responding to your e-mail. While I was watching "to catch a con man", I noticed the scammers were dressed really poorly to be international bankers and they looked nervous which would have alerted me that something was wrong. Always look for ways to scrutinize their identity, plan, appearance, contacts, meeting places, e-mails, methods used for contacts and meetings, and referrals.

If you get interested in the conman scams thinking your deal is different and very real, make sure you are diligent throughout the process. For example, you may get presented with some government documents or other evidential facts to further convince you the deal is real. You may also be asked to provide your personal information to finalize the deal which may subsequently be used for identity theft and to commit various frauds under your name. Make sure you verify the authenticity of the documents and the validity of the facts before moving on to the next steps further committing yourself to the unreal plan and question every thing in every step of the way.

Return from conman scams to the identity theft prevention page.