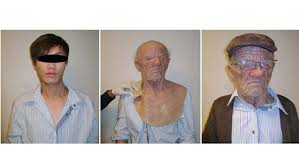 Although we don’t routinely hear about cases of immigration identity fraud, the practice of committing identity theft for entering a country illegally and then applying for political asylum is not very uncommon.

The immigration problem seems to be twofold these days. First, countries which have long borders with other countries seem to have porous borders allowing immigrants to enter illegally and often without the knowledge of authorities which makes them unaccounted for until they are caught or self reported. And second, criminals and terrorists can take advantage of this border security weakness to enter for a variety of reasons.

In 2010, a young Asian person who disguised himself as an elderly white person attempted to enter Canada with an Air Canada flight departing from Hong Kong. It was originally said he exchanged identities with an older white person at the Hong Kong airport and put on a Mission Impossible quality mask, a cap and glasses looking like an elderly person to board the plane bound for Canada.

As you can see from the actual picture taken by the Canadian Border Services Agency after his apprehension above, the disguise was well done.

If you have put on silicone masks covering your head and face during parties or Halloween, you must know that it’s not very comfortable to keep the mask on for a very long period of time. As such, the young person took his mask off in the middle of the flight which was noticed by flight crews who notified the authorities. Another give away was his young looking hands which did not match his wrinkled and old face.

The main point of this article is to discuss how he got away with the multiple checkpoints to board the plane. There have been many speculations about whether he used a US passport according to a Canadian government official or made an identity swap with an elderly person at the airport for whatever reason. A Hong Kong official even suggested "the man likely escaped detection because he used his own travel documents and a genuine boarding pass when clearing immigration checkpoints in the southern Chinese city, then swapped travel papers with a collaborator in the transit lounge just before boarding the flight to Vancouver."

Passport alteration and using stolen identities for immigration identity fraud purposes is not uncommon but why would the young person disguise as an elderly to board a plane and why would an elderly person swap identities with another passenger if such claims are true?

The reason might be that An elderly person is less likely to be scrutinized at the airport security checkpoints which offers a great incentive to commit immigration identity fraud more successfully. There were multiple failures to apprehend the person before boarding the plane and his great disguise may have been the source of his success more than his altered pieces of identities.

As far as the incentive for the elderly person to lend his identity to a complete stranger can be tied to a better seat and other rewards. Consumers should never swap identities with others whether it’s their passport, boarding pass, or frequent flyer card no matter the rewards. This time was a case of a young person succeeding at illegally entering another country to seek refugee status, but the next case may involve terrorism which will complicate everyone’s life even further.