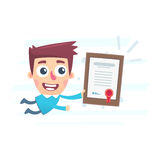 This article describes the basic difference between internal and external certification as it relates to professional development in a simple and concise language.

Typically, a professional certification process consists of an examination or a formalized assessment of a candidate’s qualifications such as education and experience by an “independent entity” in order to grant the certification in a particular field.

In the context of identity theft, some identity protection companies advertise that they employ “certified experts” or “certified advisors” to serve their customers. However, these companies fail to specify what professional certification their employees hold and which organization granted the certification.

For the most part, when these companies refer to certification without specifying the certification name and issuing body, they most likely refer to their “internal certification” process which is not independent. Internal certification often refers to a company’s training program which is based on its operating procedures for various groups and roles. For example, the resolution center or call center employees may be trained on company procedures related to customer call handling and documentation, internal or external reporting such as Legal or law enforcement, and engagement of management or other groups within the company. After employees complete the training course, they are often required to take a test to prove their knowledge of the training materials and company’s operating protocols. These training and tests are managed by internal company staff or their consultants.