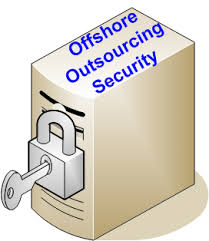 There are many offshore outsourcing security risks that create real challenges for companies, especially in the areas of privacy management and regulatory compliance.

Many businesses offshore their data management, IT infrastructure support and management, system security, identity and access management, and help desk or call center to support end users to name a few. These practices give the offshore entity access to company‘s data which often include the personal information of consumers. Offshoring is not limited to private or public companies which are trying to save money and support the global business operations. Even governments offshore work despite requiring other companies to not send personal data offshore or limit access from offshore locations.

With offshoring, data transfer is inevitable because once access is given to third parties, it is impossible to prevent data from leaving the company and the country. Some of the common business data transferred to other countries include consumer name and address, emails and phones, tax data, credit scores, credit card numbers, health and medical information, etc. In the case of government efforts to log and monitor people's emails and phone conversations, some of the monitoring activities and even recorded data may leave the country for cheaper offshoring services which will allow other countries to use the data to spy on foreign countries.

The primary driver for offshoring is cost savings and increased profitability. Offshoring may gradually end or decrease as the cost of offshore services increases due to changes in living standards, salaries, and cost of living. But until then, the majority of companies are seizing the offshoring opportunity to better compete.

As we consider offshore outsourcing security risks, we have to assume that offshore vendors face the same security challenges as the rest of us and will sooner or later be targets of security breaches. The risk of offshoring and privacy compliance is not limited to just consumer information. Businesses run the risk of losing their proprietary data to their global competitors which may include their criteria used for business decision making. That said, privacy laws may not prevent business offshoring or even restrict personal data transfer to other countries, however, they require the same level of security controls and ownership to be present at all times even if work is assigned to another offshore company, and, consumers be notified about privacy practices and data breach cases.

This creates another offshoring challenge which is in the case of offshore data breach cases, what protection or recourse the company has to protect its customers? Due to the inexistent and incoherent global laws, what is a company to do if their offshore vendors become targets of data breaches? They can not easily prosecute the offshore vendor other than to terminate the contract. Meanwhile, companies may become target of domestic lawsuits for not properly overseeing the security of their vendors, failing to notify consumers about offshoring their personal information, and, not having a recourse or plan to protect their customers.

Visit our blog for the latest articles after offshore outsourcing security risks.